The 376th film I have seen in theaters…

It has been over two months since I have sat in a movie theater. That last trip was on August 26th, and the film was Blue Jasmine (review). I am hit or miss with Woody Allen’s work, but when it hits…it hit. Blue Jasmine was phenomenal. What could I possibly choose to follow such a sublimely perfect exploration of the social classes in America and one woman’s hypocritical struggle to maintain her sanity? 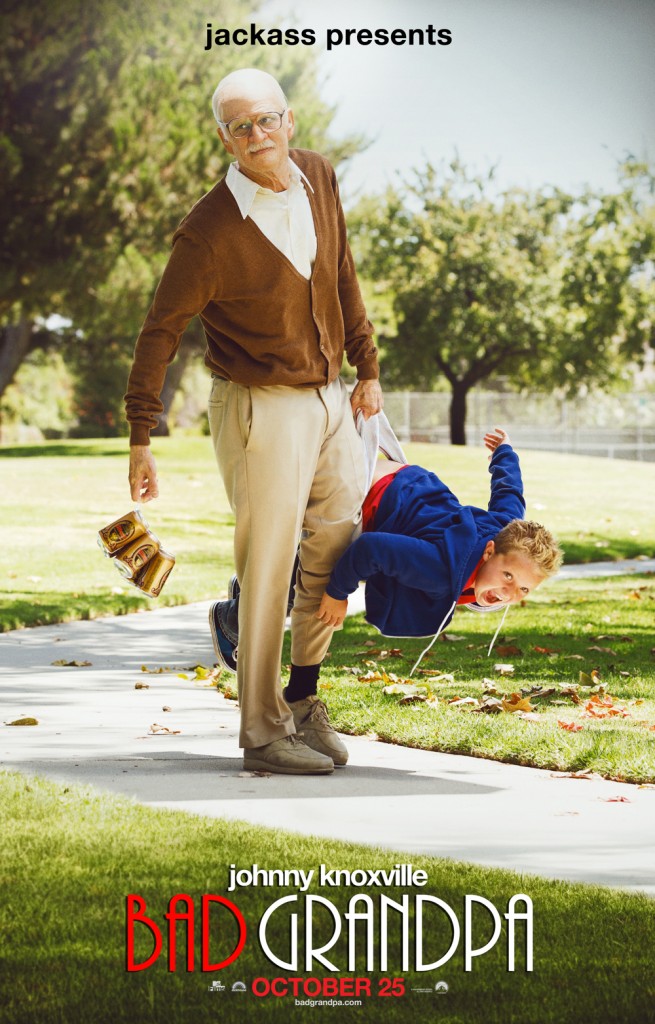 A crackhead mom is going to prison. She needs to get her 9 year old son to his father while she is away. Her recently widowed father takes on the job to drive from Nebraska to North Carolina with little Billy. That is the story of this almost-film. We all know Jackass. It is a series of “hidden camera” sketches or crazy stunts performed by a group of buffoons led by Johnny Knoxville. This movie is the first attempt by the crew of stringing these scenes together with some sort of story. It largely works, but we aren’t here for the heartwarming tale of a grandpa and his grandson. We want the crude humor and sight gags.

Johnny Knoxville is in his element as Irving, the “Bad grandpa”. Using the character he developed during the series, he is at home pranking the hell out of dozens of poor victims. He does it very well.

Jackson Nicoll, Billy, actually comes close to stealing this movie away from Knoxville. The finale at the Beauty Pageant was an ideal capper to the film, and this kid sold it.

What can I say? This is my generation’s contribution to pop culture in the late 90’s. It is a fun 90 minutes in the theater, and the “restaurant scene” nearly destroyed me. If you like Jackass, go see it. If you don’t, stay away. I give this one a 5/10 against “real” movies, and a 8/10 for what it is. I prefer this without a story though. Give us Jackass 4!