The casting could have destroyed this film, but fortunately they found the right mix.

Will Sasso comes the closest I have ever seen to a Curly impression that is a true Curly. Sasso is able to do the nyuk and barks while still conveying the child-like qualities that made Jerome Howard a star.

Chris Diamantopoulos was a perfect Moe. The mannerisms were spot on, and the vocal work was superb.

The real accolades, however, are rightfully given to Sean Hayes (of Will and Grace) who practically channelled the ghost of Larry Fine. Larry is the toughest Stooge to get right, and Hayes was superb. I have heard that voice acting god Billy West was brought in to coach him on Larry, and let me tell you- those were dollars well spent.

The film is about 90 minutes long as is broken up into 3 “shorts”, although there is a larger story in place. Larry David as Sister Mary Mengele was inspired. I don’t know who’s idea it was to dress that man up as a nun, but it paid off. The opening scenes with the Stooges as children are ok, but the real fun starts when we meet up with them around age 35. The story is essentially the plot of The Blues Brothers in that the Catholic Orphange that raised them is broke, and they need to raise cash to keep it open. The rest of the film shows their adventures in raising the money. It is simple, and effective.

There is one scene in the film that so encapsulated the stupidity of the Stooges that I am still laughing 13 hours later. It is a little slice of sight gag perfection that is rarely experienced these days. Without spoiling, let me say that I will never think of Free Range farming quite the same way again. It was such a quick and  stupid gag, but it was perfect. It is obvious that this film was made by people that understand the stooges. There is not much that needs to be understood, but the Farrelly’s get it.

When most of the nation stopped showing stooges in the 70’s and 80’s before their tv revival nationwide in the 90’s, there were small pockets of America that still showed the stooges every day. I was lucky to have lived in the Boston/Providence area where the stooges never went out of style and each New Year’s was rung in with the Annual Stooges Marathon on Channel 38 hosted by “The Movie Loft’s Dana Hersey. I literally watched these guys every week from age 4-10. We had tons of VHS tapes to add to the viewing. (I have probably seen “disorder in the court” no less than 100 times, not to mention “Malice in the Palace”)

The Stooges were a big thing in my family. My father and Uncle loved them, and that was passed on to me. I am particularly  happy to see that they continue to entertain children today- as evidenced by the roaring laughter of the kids at last night’s screening. If you have kids, take them to go see this movie. It is genuinely funny. 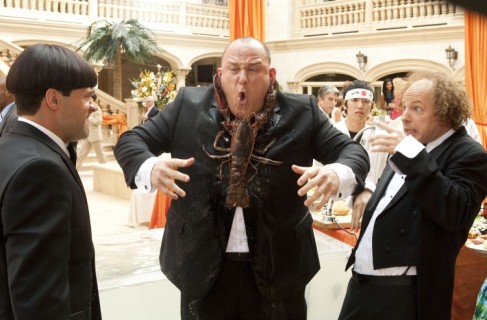