The 366th film I have seen in theaters…

I ventured out with a few friends, and my wife, to see the latest Star Trek film on opening day. SPOILERS will absolutely follow.

The plot was good. The story moved along at a brisk pace, and never let up. It opens with the Enterprise on an away mission to planet Nibiru, inhabited by a pre-industrial society. A volcano is about to explode, and Kirk and Co. must stop it, because it poses a threat to the indigenous life on the planet. Here is the first area that is causing rebuff by fans- instead of orbiting the planet, the Enterprise is hiding in the Ocean. I’ll concede this point. It would have made more sense to park in orbit, but lets be real- the writers wanted a cool scene of the Enterprise rising out of the water. Well, there is a snag in the plan to use a futuristic bomb to stop the eruption, and Spock is stranded in the Volcano. Kirk must fly the Enterprise over the volcano and beam him out- reveling the ship to the native population. This violates the prime directive of not interfering with a developing civilization., but he saves Spock.

Back on Earth, Kirk is demoted to Commander, and stripped of the Enterprise for violating the prime directive and covering it up. Spock is reassigned to the USS Bradbury, and Kirk’s future is uncertain…

In London, a man (Micky from Doctor Who) has a daughter that is dying of a genetic disease. A mysterious man offers to save her life…but at a cost. We next see the mystery man drawing blood from his veins and giving it to the father. The father adds it to the IV, and the daughter recovers instantly. The father is then forced to go into a Starfleet facility at the USS Kelvin Archives and detonate a bomb, killing dozens.

Admiral Pike, now given command of the Enterprise, enlists Kirk as his First Offcier- saving him from dismissal, or return to the Academy. The call comes through- report to headquarters: Starfleet has been attacked. All the Command Crew and Admiralty in the sector are gathered in a conference room, with Starfleet Commander Admiral Marcus, to discuss the bombing. The mystery man is identified as John Harrison, a disgruntled Officer who the ships must now hunt down.  As Kirk questions why he would bomb a library, with nothing vital, he realizes that it could be to cause the leadership of Starfleet to gather in one place- the conference room they are currently occupying.

Harrison appears in a shuttle outside the window and proceeds to fire into the room, killing scores of Starfleet’s best. Kirk Manages to disable the shuttle, but Harrison beams away. Among the dead is Admiral Pike.

Kirk has Scotty do some investigating and they discover that Harrison used an advanced Transporter to beam to the Klingon Homeworld of  Q’onoS, and is hiding in an uninhabited area. Admiral Marcus meets with Kirk and Spock and reveals that Harrison is did not bomb a library, but the headquarters of Section 31, Starfleet’s version of Black Ops. He tasks CAPTAIN Kirk, and Spock, to take the Enterprise to the edge of the Klingon Neutral Zone and fire 72 experimental Photon Torpedoes onto  Q’onoS and kill Harrison.

Enroute to the ship, a new Science Officer is assigned to Kirk- Carol Wallace. Spock immediately questions why a second science officer would be necessary, but is silenced by Kirk because Wallace is a Hottie. Upon arriving, Scotty refuses to allow the Torpedoes onboard until he knows exactly what they are made of, out of fear they would damage the ship. Kirk and Scott get into an argument that ends with Scott’s resignation. Kirk is focused on revenge, even to the point of losing Mr Scott.

The Enterprise takes off, and despite orders, Kirk resolves to travel to  Q’onoS and capture Harrison rather than execute him. Spock uncovers that Carol Wallace is in fact Carol Marcus- daughter of the Admiral. She is concerned about the Torpedoes and forged transfer documents to see what her father was hiding. The Enterprise suddenly falls out of warp, due to a coolant leak. Kirk, Spock, and Uhura travel by shuttle to  Q’onoS as the Enterprise repairs.

Once there, Spock and Uhura settle a lover’s quarrel just as Klingon ships attack. After a dogfight, the Shuttle is surrounded and forced to land. Uhura attempts to talk to the Klingons, relating that they are there to capture a criminal, but are interuptted as Harrison opens fire and takes out a squad of Klingons, including their ships. One Man. Dozens of Klingons. Over in minutes. He gets the drop on Kirk and asks “How many torpedoes do you have”. Upon getting the answer of 72, Harrison promptly surrenders. Kirk then repeatedly punches and kicks Harrison, to the point that Kirk is exhausted. Harrison is not phased at all.

Back on the Enterprise, McCoy marvels at the ability of the prisoner to take out a squa dof Klingons single handed and takes a blood sample. Harrison alerts Kirk to the fact that he knows more than he lets on. He tells Kirk to open a torpedo to see the truth, as well as check out some coordinates near Jupiter. Kirk calls Scotty to check Jupiter while McCoy and Marcus open the Torpedo. Once open, they see not explosives, but a man, cryogenically frozen. More puzzling, to the crew if not audiences, the man is 300 years old…

They confront Harrison who reveals that all the torpedoes carry his crew. Harrison, is a fake name, assigned to him by Admiral Marcus. His true name…is…

That’s as far as I go! See the movie for the resolution.

Chris Pine is terrific, once again, as Captain Kirk. Facing terrible odds, and journeying into darkness as he faces the militaristic side of Starfleet. 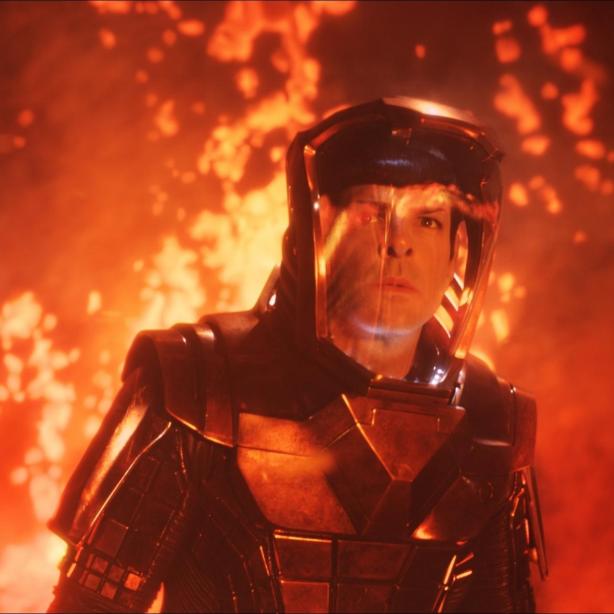 Quinto shines as Mr Spock, still adjusting to the loss of Vulcan, his love with Uhura, and becoming friends with Jim.

Saldana did not do much as Uhura this time out, other than her relationship problems with Spock. 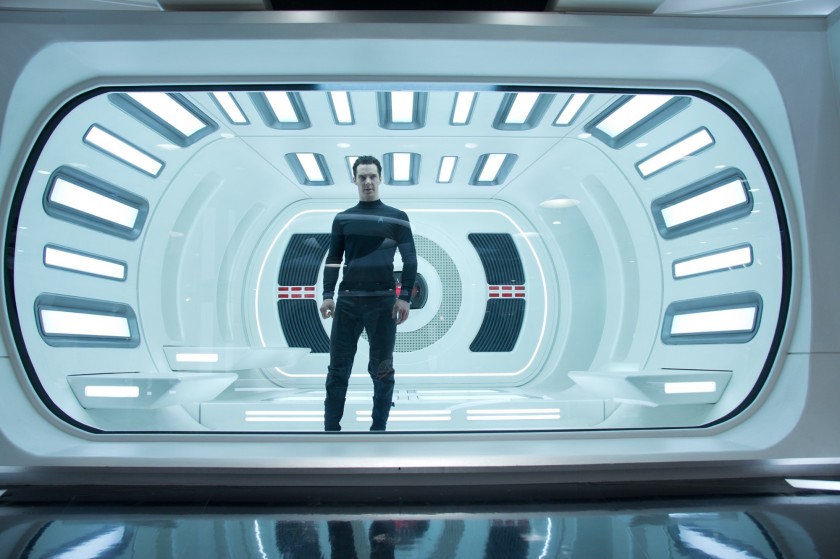 Benedict Cumberbatch’s big intro to American audiences is gonna be huge. He is not the Khan we got with Montalban. This guy had a different experience after waking. He was taken by the government and forced to work as a prisoner for years. He operates entirely on vengeance, and his superior intellect is apparent.

Alice Eve joins as Carol Marcus, the woman who will eventually give Kirk a child.

The rest of the crew is great, particularly Karl Urban who was seemingly born to play Dr McCoy.

On par with the first film. The story was good, cast good, effects awesome.