The 368th Film I have seen in Theaters…

I have returned from a first viewing. I had intended my IMAX 3D viewing on Monday Night to be the first, but as some friends could not make it, and in laws were in town… we snuck off to see a regular 2D showing.

I think my brain is broken. I need to see this again.

I am the king of Superman in my immediate circle of friends. As a 2 year old, I am told that I was enthralled by Superman. I have no memory of this. I would leap off of the furniture, holding a small blanket around my neck and dive onto the ground (I was a rambunctious child). In one horrific incident, I leap off and smashed my head on the coffee table- cracking my head open. Bad. I still carry a scar above my left eye from the incident.

As the years went on, my devotion to this character continued. Christopher Reeve was a God to me. Even as the movies dropped in quality, I stuck with them as a child. I devoured the Super Friends and every other permutation of the Super Powers franchise. I watched the old George Reeves Superman show in reruns and got VHS tapes of the old Max Fleisher Cartoons. I had tons of Superman toys. All of this WITHOUT READING ONE COMIC. (except those included with the action figures).

Then, in 1988, on Superman’s 50th Anniversary I convinced my mom to buy me some comics at the newsstand, a now nearly extinct creature. It was revelatory. Adventures of Superman 441: 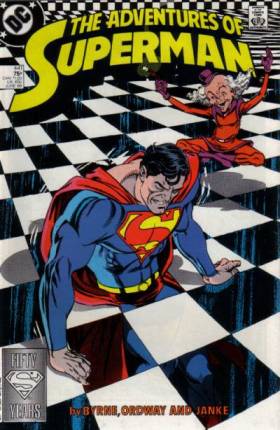 It was a story of Mr. Mxyzptlk- a name I can spell from memory I’ll have you know! It was enough to get my started. I quickly discovered that there was a dividing line in DC Comics- Pre Crisis and Post Crisis. Crisis restarted the Superman Story from scratch with a mini series called… 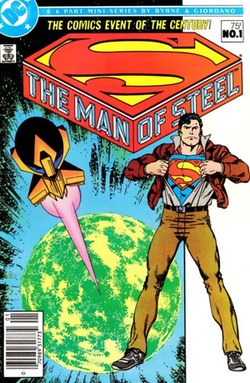 yup, same name as the damn movie. If you pay attention, the spaceship that brings him to Earth is similar to this one. In fact, for the attentive reader, there is a HELL of a lot in this film that synchs up with Late 80’s and Early 90’s Superman lore. More on that in the full review.

1988 was a crazy year to get into comics. It was the Batman titles that really grabbed my attention with the death of Robin, but I was happy with Superman. I enjoyed a near weekly habit with the Man of Tomorrow’s adventures. As I aged, and Superman went through his famous “Death/Rebirth/Red/Blue” era, I stuck with him. I learned the love the creators of this period. 1986-1999 was my favorite era of Superman. As time went on, I expanded my collection backwards. By 2005, I had a complete Superman Collection from 1958 to 2005- including superboy, supergirl, Jimmy Olsen, Lois Lane and any other damn tie in. I got them cheap before they skyrocketed in price. I sold it all off in 2005 to make ends meet. What I never parted with was a few issues- the original “Man of Steel” mini series and the White “Wedding Issue” which I have signed by the dozens of creators that contributed- all in person at various cons. Never did get my Curt Swan…

I evolved into more of a Green Lantern fanatic as I grew to manhood, but I always hid a secret place in my heart for “Big Blue”. I watched Lois and Clark every week, dived into the animated series of the late 90’s and appreciated what Smallviille became. Superman Returns was not a bad movie, but it had some serious issues. As wonderful as it was to see a continuation of the old series, it was a misstep. Superman needed to be reinvented. What we got this week, was the reinvention we needed.

I was not kidding earlier- my brain is broken. This movie starts off absolutely FASCINATING (evoking so much of the Krypton of 1986’s revival, while weaving in modern (mid 2000’s) idea of the Kryptonian caste society) As the story progresses, it very slowly builds up, hitting plenty of character notes for the supporting cast to shine… and then it goes BOOM!

I have never seen super hero spectacle played out as witnessed in Man of Steel. It puts the Superman/Zod fight of Superman II to shame.

There are a few nitpicks I can, and will, make. However, this might be the movie of the year for me. However, as stated, my brain is still broken.