In the late 90’s, myself and a few friends were avid comic book readers. Every Wednesday we would dutifully pick up our comics at the local shop, read them, and share quick reviews with each other. It was fun and we did it pretty much every week from 1996 to around 2005. We tapered off as some stopped reading, random bouts of apathy intervened, and some of us just lost touch with one another. As this blog has grown over the last 4 years, I feel a need to write more things for all of you to read. So, Comix this week is reborn. Comic books are one of the great loves of my life, and I hope that all of you enjoy this weekly jaunt into this amazing world. As with my movie reviews, this is not comprehensive. I cannot afford to read every comic, nor will I illegally download them, I respect the medium too much for that, but I don’t judge any who do. Every week there will be a “pick of the week”. I may do a year end retrospective sometime around new year’s day. I use cover images in my reviews. These images are from various comic companies, such as Marvel and Image in today’s case. They own this stuff. I do this for fun, not money.Enjoy. 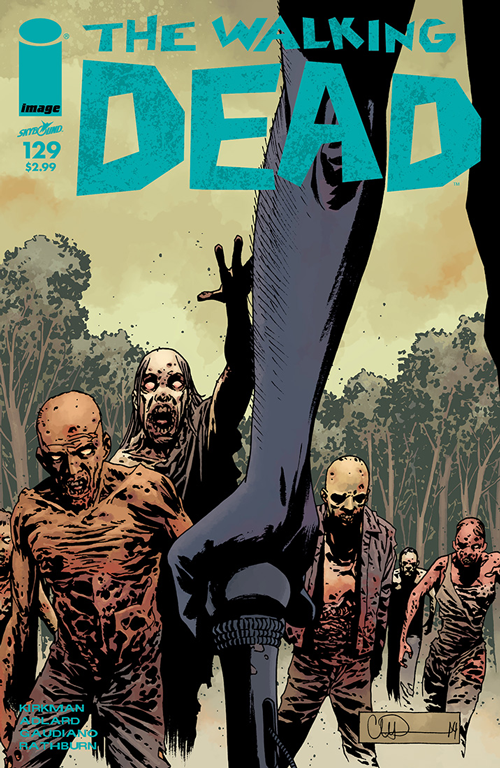 We continue to learn about the new status quo as our story has jumped into the future. Negan is a prisoner in Rick’s new world. His son, Carl, is moving away from home to learn a trade at one of the other pockets of civilization. As the new characters meet and get used to Rick and his ways, they stumble upon Negan, who will try to use them to gain his freedom and sow chaos in this new society. A decent issue. I was SO CLOSE to dropping this from my pull list, but the time jump breathed some new life into it. 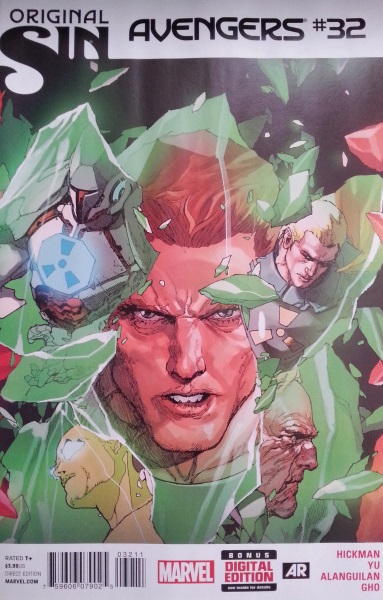 Cap and company are being thrown further and further into the future due to a broken infinity gem- time. After the chaos of the Ultron controlled Earth of last issue, they now find themselves about 5000 years in the future. Humanity has spread across the stars and is a interplanetary society. Franklin Richards, son of Reed and Sue, is still alive and provides some perspective on the colliding universe problem to Captain America. Cap is undeterred though. He believes the Illuminati are wrong, despite the threat to the universe. A fascinating issue. This one definitely felt like the calm before the storm. Hickman is great.

The end is almost here! Wolverine has spent most of this new series undercover. To the world, it appears that he turns bad after losing his healing factor. This issue features a new Logan. He is at peace with himself, and his situation. He knows that death is inevitable and that he has to face it. He also must save the criminal gang he befriended these past 9 issues, as they are now prisoners of Sabretooth. Back on the right side of things, Logan is going to attack his old enemy with the full might of SHIELD. A fantastic series. I know that Wolverine will not stay dead for long, they never do in comics. This series has been pretty great. Let’s hope it ends on a similar note.

The series finally ends! This one has been delayed quite a bit. It ended well, although predictably. Bucky helps save the scientist lady from the Soviets only to have her die in a helicopter explosion. He is taken back to Russia and his mind is wiped. Great art, and a decent little vignette of the olden days of Cold War intrigue.

A great issue that shows The Human torch reasoning with the grand-daughter of Golden Girl- Japanese superhero of WW2. The grand-daughter, Radiance, has taken hostages due to discovering that the Invaders had knowledge of the Atom Bomb. Hammond reasons with her, and eventually defuses the situation by telling her how things really went down in 1945, and her grandmother’s role in saving lives. An interesting character who I assume will be part of the new Invaders roster. Not sure about the anime sexy cover though. 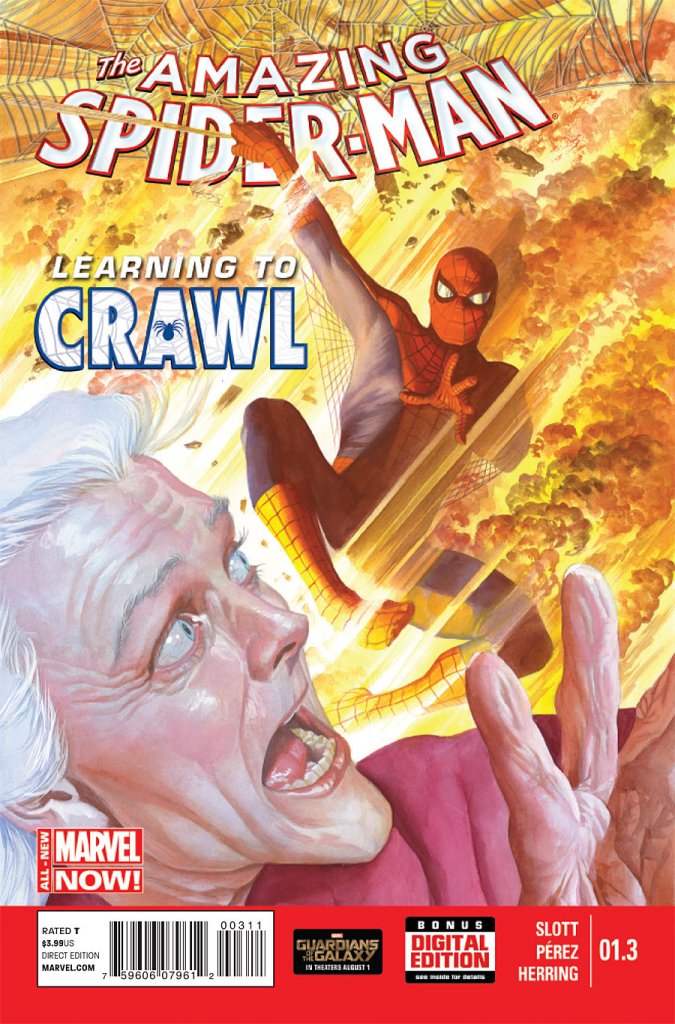 Dan Slott tells this new version of “Untold Tales” of Spider-man’s earliest days in the suit. We mostly see him interact with “Clash” a schoolmate who initially loves Spidey, but comes to hate him. I love the Alex Ross covers on these issues, and I really love the old school art inside. My fear is that this will overstay it’s welcome, if it has not already. As much as I enjoyed it, I kept asking myself if another comic of this type necessary? The early days of Peter’s heroic career have been done to death. Hit 1.6 and end please. Please.

Ok here it is folks…. 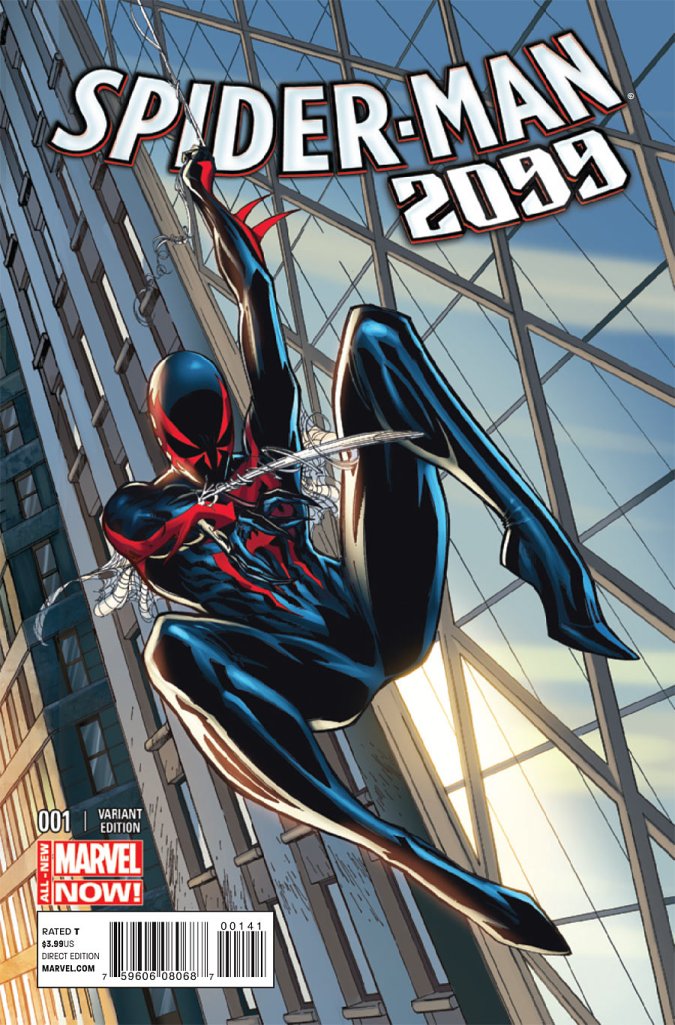 Miguel O’Hara is back!

After the events of Superior Spider-Man, Miguel finds himself stuck in 2014. He has used his time travel knowledge to win the lottery, to afford an apartment, and get a job at Alchemax. In 2099, he fights Alchemax and it’s evil machinations. Of course, he is secretly the son of Alchemax CEO Tyler Stone. Now in the past, he is working with his grandfather, the douchebag Tiberious Stone who has teamed with Liz Allen, ex wife of Harry Osborn. Unknown to all, Norman Osborn was instrumental in the establishment of Alchemax as his legacy. Oscorp is dead, but his money and power, through Liz and little Normie, can ensure the survival of his empire. Anyway! As Miguel swings around, a time cop from the 2200’s has come back to kill him and set the timeline right. A fun battle unfolds in Alchemax HQ, and the time cop is eradicated. Liz realizes that this new Spider-Man is an Alchemax employee and wants him working for her.

It was great to have this series back! it was a definite favorite of mine back in the 90’s. I cannot believe the original issue came out over 20 years ago! I. Am. So. Old.