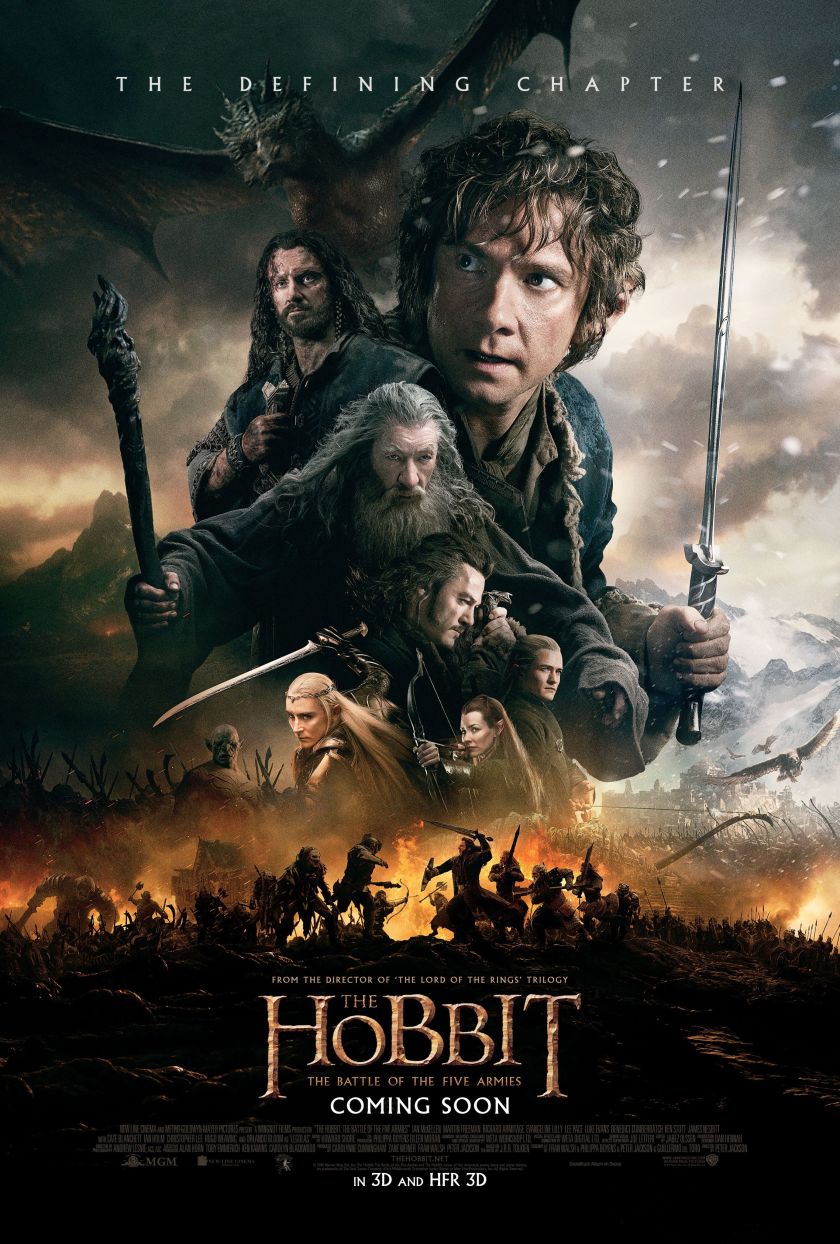 The 403rd film I have seen in theaters… 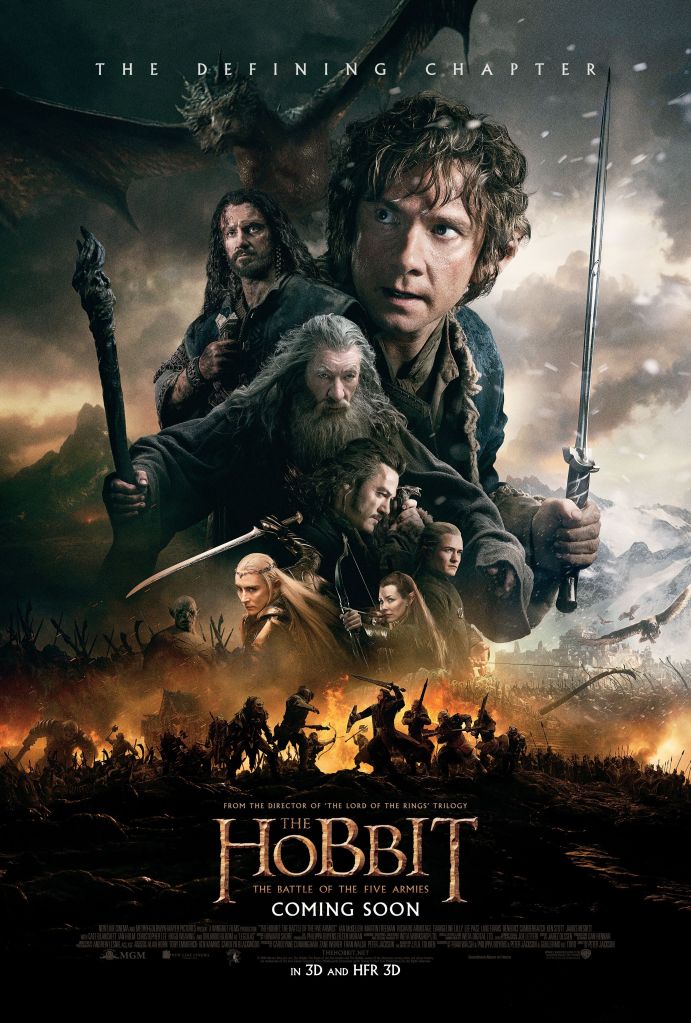 Picking up immediately after the events of part two (this not being 3 stories as much as one continuous one), Smaug lays siege to Laketown. He flies over the buildings, scorching everything in his path, it was quite terrifying. Bard breaks free from prison and climbs the highest tower and takes out Smaug with a well placed arrow to the chest. The Dragon is defeated, but the town is gone. He rallies the survivors and march to the ruins of the human city of Dale, near Erebor.

Gandalf is prisoner of Sauron. He is about to be executed when Galadriel arrives with Saruman and Elrond. They fight the Nazghul and banish Sauron from the Western lands, back to Mordor. What they most feared has come true. The Ancient Evil has returned. Gandalf, knowing that a mighty army of Orcs is riding to Erebor, rides away to warn his compatriots.

With Smaug dead, Thorin takes up residence as King under the Mountain. He spends days, weeks, searching for the Arkenstone. Bilbo is scared of the greedy “dragon diseased” state which Thorin has entered and decides to keep the stone hidden. When the humans of Laketown reach Dale, Thorin orders the gate to Erebor closed. Bard tries to talk sense to Thorin, to give the humans their fair share of the treasure to rebuild their city, but Thorin has gone mad with greed and sends him away. This leads to a standoff.

Gandalf arrives and  tries to broker peace, but fails. He warns Thranduil, king of the woodland elves, of the orc army, but this is dismissed. Thranduil feels it is a lie to save Gandalf’s Dwarven friends. The humans and Elves (who have treasure in the mountain as well) march on the gates of Erebor. (2 armies). Unknown to Thorin, Bilbo has given the Arkenstone to the Humans and Elves to broker peace. This pushes Thorin over the edge and he tries to kill Bilbo. The other Dwarves hold him off and Bilbo escapes. Then the army of Dain, Thorin’s cousin arrives and is prepared to fight the humans and elves and defend his King. (3 armies).

As the fight is about to start, giant worms burrow up through the ground and out comes pouring the Orc Army led by Azog. The Battle immediately starts (4 armies). In the midst of everything, Thorin realizes what is happening to him, and turns away from greed. He rallies his dwarves and they join the fight. Azog attacks both Erebor and Dale, causing the heroic armies to be split.

Legolas and Tauriel arrive and let them know that another Orc army from the North is arriving. (5 armies, natch)

Thorin rides up to kill Azog and end the battle. Along the way, Kili and Fili, his nephews are killed. Kili’s death is particularly bad for Tauriel, who has fallen in love with the Dwarf. Thorin fights Azog and defeats him, but is mortally wounded. As he dies, he forgives Bilbo.

The enemy is defeated and Thorin is to be buried in the mountain. Bilbo says goodbye and rides home with Gandalf to the Shire.

It ens with Old Bilbo greeting Gandalf at the door to Bag End on the occasion of his 111th birthday.

I love this story. 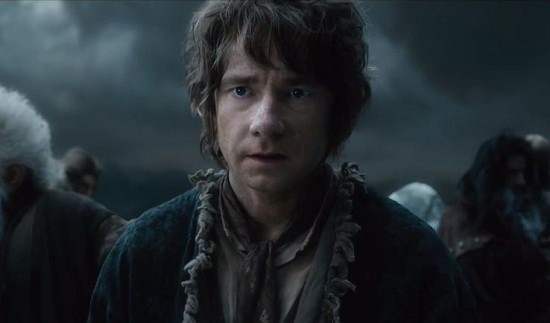 After the events of the first two films, the story of Bilbo is mostly done. He plays his part in the proceedings, but the focus is of Thorin, Bard, and, surprisingly, Tauriel. Martin Freeman did a great job in this series.

Ostensibly the main character of this piece, Richard Armitage brought the madness, and redemption of Thorin to life in marvelous fashion. 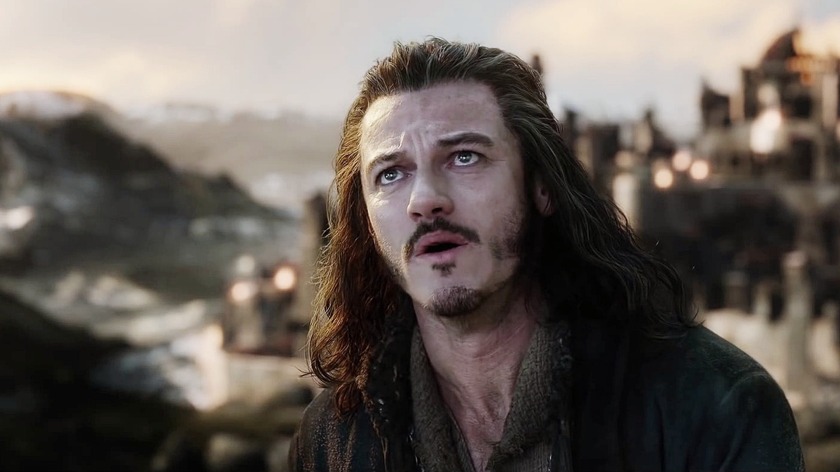 Legolas’ love of Tauriel, and her love for Kili really drive a lot of the emotion of this film. Such a tragic ending for her character. Well played by Evangeline Lilly. 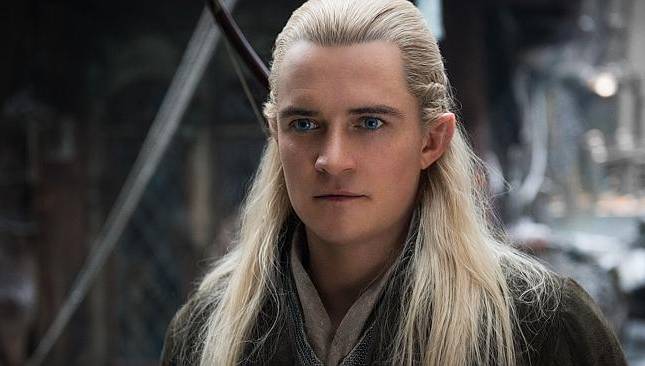 Legolas becomes a heart broken puppy in this one. Along the way he gets to do some insanely complicated acrobatics, far surpassing the slide down the “Oilyphant” in Return of the King. 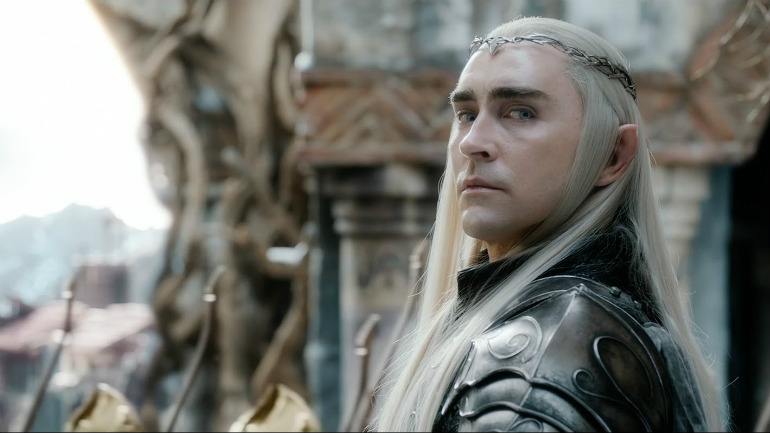 Lee Pace played Ronin in Guardians of the Galaxy and returns as Thranduil. This guy is going to be a star. Quite good.

I end with the Three-peat: 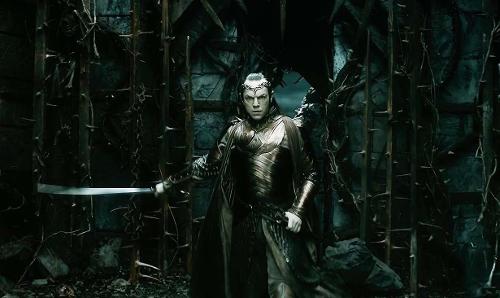 Cate Blanchett, Christopher Lee, Hugo Weaving. Wonderful that they expanded the story to be able to include the amazing backstory of what Gandalf was doing when he left the Dwarves. Saruman begins his descent into Darkness, Elrond fights the evil, and Galadriel uses her full powers against the might of Sauron.

This should have been 2 films at 3:30 each. But I get why they did not do this. Nevertheless, this is one long movie divided into 3 chunks. None of them really stand on their own, but together tell a complete story. This was a great finish to the tale. At the end of things, this was not as good as Lord of the Rings, but The Hobbit was never as good as that story. This is the prologue, maybe not even that, a curious side story to the main event. Peter Jackson should be proud. He gave us 6 memorable films.