The 408th film I have seen in theaters…

22 years after the events of Jurassic Park, Ingen has been sold and the new owners decided to realize the dream of John Hammond. Jurassic World is open for business… but they need to keep the tourists coming. After several years of operation, JW needs to breed new Dinosaurs to generate interest. To further this aim, they have spliced DNA to create an entirely new breed of Dinosaur. Unknown to the owners and operators of the park, this new Dino is being bred in hopes of creating a weapon to use in future wars…

2 kids visit their Aunt, who runs the park. While there, the Indominus Rex, the test tube spliced dino, breaks loose and raises hell. With the help of Raptor trainer, Star-lord, they try to stay alive and stop the I-Rex before everyone on the island dies.

Chris Pratt is the man. He was the star of the #1 fllm of 2014, and now again in 2015. This is the birth of an honest to god Movie Star- something we’ve not seen in many years. He sells this movie, even when it gets ridiculous. Awesome work.

Bryce Dallas Howard is the manager of the park. She spends the entire film running away from Dinosaurs, in the jungle, in high heels. It would be idiotic if the movie did not directly mention it and poke fun. This made is hilarious and epic. 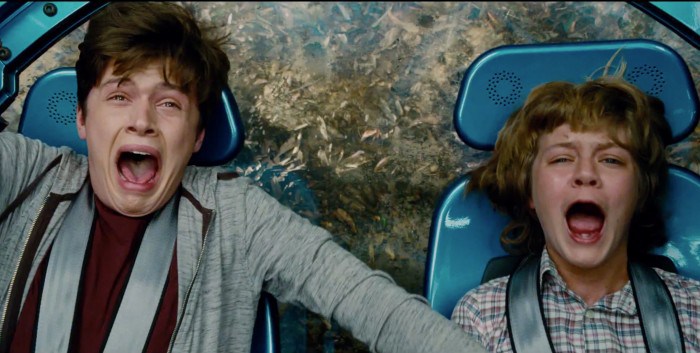 Nick Robinson and Ty Simpkins play the 2 nephews visiting the park. They are the eyes we see the wonders, and horrors, of the park through. They did a good job with limited roles.

Vincent D’Onofrio is the head of security that is hoping to weaponize the dinos. A typical asshole role who, quite rightly, gets eaten.

The real stars of the film are the awesome dinosaurs though. Seriously, look at this stuff.

Not as good as the original, but good enough. It made for an excellent day at the movies and did not disappoint. Deserving of the 200 Ba-zillion dollars it is making.