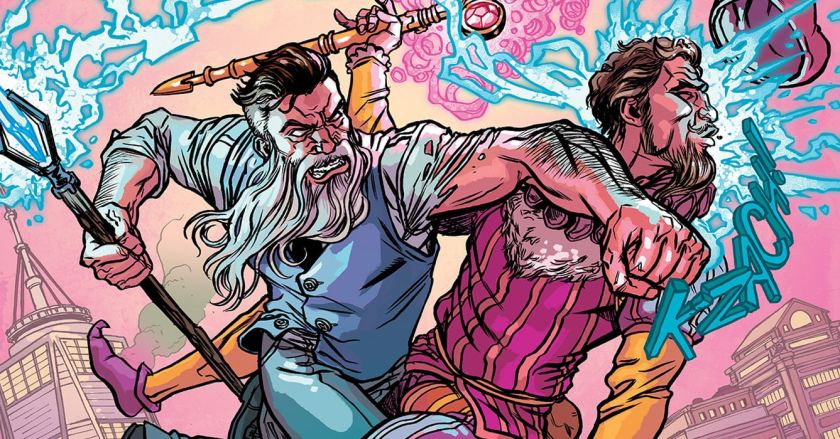 Superman 15 – Multiplicity continues as the Supermen of the multiverse come together to fight a threat to all of their existences. The issue opens with a badass fight on Earth 14 as the Justice League of Assassins defends their Superman. “Our” Superman devises a plan to flush out the enemy and the issue ends with the trap being sprung. This cover is ridiculous. Super-Rabbit. Jesus. The comic itself was ok. 7/10.

Batman 15 – Rooftops concludes the story of Batman and Catwoman’s last night before he turns her over to the cops. It picks up where part one ended- both of them on a rooftop, naked, after making love. They FINALLY admit they love each other as the scene changes to show the “Golden Age” origin of their first meeting on a boat, and the “Year One” origin on the streets. The art was fantastic. The writing is fantasic. This 2 parter might be my favorite Batman story in years. That cover! 9/10.

Doctor Aphra 3 – Aphra and her father find Yavin IV covered in Imperial troops following the battle of Yavin. The moon is the location of an ancient Massasi temple that will show the way to the mythic Jedi/Sith site which holds untold power. The art is good. The writing is good, with a great balance of humor. 7/10

The Few 1 – A new title launching today. This is a sort of post apocalyptic dystopia (as is standard) where warlords in the “Remaining” States of America fight against some sort of authority in a “palace”. It was written well, art was black/white/gray with hints of red. The story just did nothing for me. I am jumping off here. 4/10

Kill or be Killed 5 – The latest serving of the Brubaker/Phillips magic returned this week after a month hiatus. This new story arc takes place a few months after issue 4. Dylan, our “hero”, continues to train for his new job of murdering people to prevent a demon from killing him. He gets some new gear, some fighting training and sets his sights on a Bernie Madoff type. The thrust of this arc is that while previously he was not on the police radar, he now IS. I expected this to be the pick of the week. I am amazed that it is not. 9/10.

Curse Words 1 – Chris Soule, who has been very prolific the last 8 years presents his newest title- Curse Words. On art is Ryan Browne, the fantastic creator of “God hates Astronauts”, one of the best titles of the last few years. This is the story of Wizord, an inter-dimensional Wizard who travels to Earth to destroy it for his dark master. Instead, he likes the place. He decides to set up shop as a Wizard for hire. Everything goes well until his evil wizard friends come to get him. Awesome and ridiculous, this is the best comic of the week and an INSTANT add to my pull list. 9/10