Ah, the joys of geekdom! The last couple of weeks have seen me acquire a few cool pieces in the ever growing “Collection”. We will look at the new, and showcase a couple of older items as well. Enjoy the photos and pass along anything you think I’d like to superponte@cox.net (The cheaper the better)! Yes, you can make money reading this blog.

I was perusing the local Lowe’s when I saw discounted Christmas swag. Being a compulsive decorator, I bought maybe 20 packs of 6.00 Garland at 75% off. I also found this guy at the same 75%. An Elvis Christmas tree ornament that plays “Burning Love”. To hell with the tree! This MF’er is going on permanent display!

For a cool 2 bucks I picked up a pack of Batman Returns playing cards. I collect various card decks and knew this was meant to be mine. This is my favorite of the first 4 Bat-films.

AT-AT Driver (Kenner 1981) – Every month I buy one vintage Star Wars action figure. January’s toy is the AT-AT driver from Empire. I don’t buy for perfection. I look for the best figure, at the best price. I am not even bothered by repro weapons. I can always get original weapons somewhere down the line if I wish, but these are just loose shelf toys. Maybe when I am older (and hopefully richer) I can chase a set still on the card! 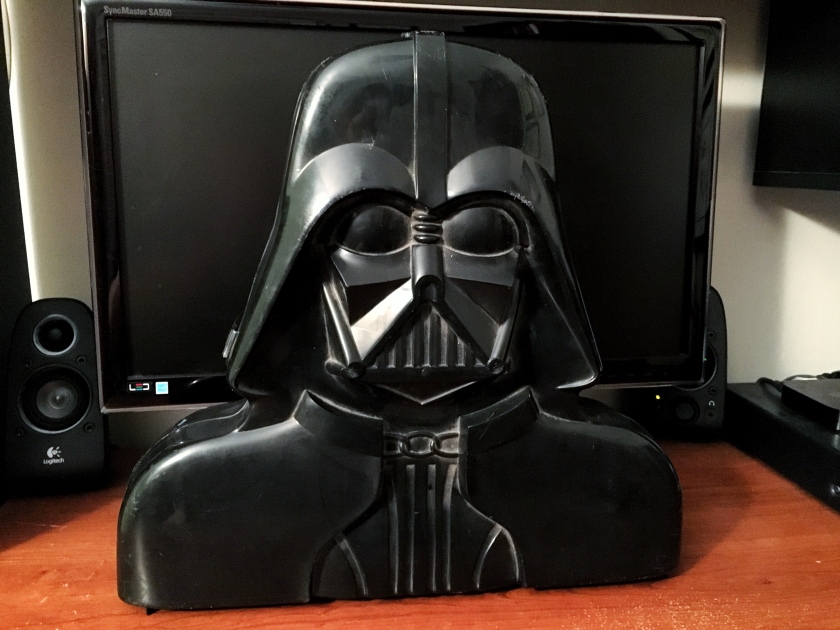 Darth Vader action figure case (Kenner 1980). I am a member of a Star Wars collecting Facebook group. Every day, people from around the world list what they are looking for, and sellers post what they are selling. As I complete my vintage Kenner collection, I knew that the cases, vehicles, and playsets were going to be needed. When someone posted this lovely piece (from ESB period with stickers), at a more than decent price, I knew it was mine.

Pink & The Brain Statues – This is my latest purchase! When picking up my comics every Wednesday, I look around the shop for new items. I saw these two bad larrys sitting on the counter in the back. These are late 1990’s cold cast statues sold at the WB store. Individually they go for 50-100 smackaroonies. As a set they could get 200+. At some point, Pinky got a broken leg, which was glued back on. This destroys the value. The store was considering auctioning it off, but broken would not sell. Not wanting to break the set they decided to see if anyone at the shop wants it first. I walked away with my two darlings for TWENTY BUCKS.

Two sets of Chompers – This one is a bit of a cheat as One item is old and the other is new. On the right we have a shellacked baby alligator head given to me as a gift around 2009 by a coworker. It was purchased on a trip to Florida. On the left are MY TEETH! I’ve had some dental work in the last 2 months (Root Canal, Crown Lengthening) and needed a couple of crowns. As I was sitting in the dentists chair, awaiting the final caps, I noticed that they had this sitting on the table. I asked ” Are those my teeth?”. They of course were. I then asked what they were going to do with them. They said throw them out, they serve no use to them. Well, that’s all I needed to hear. After all the money dental costs, I walked out of that office with 2 new crowns and a cast of my teeth. You ever looked at your own teeth…from behind? Inside your mouth? Well, I can now say that I have.

The Schnozz: Easter Island – In Providence, RI there is a store called Spectrum India. They sell all sorts of Indian/middle eastern clothing/costumes/candles/trinkets. It is a fun place and you never know what you are going to find. This sucker has been sitting in their window for years. I frequently passed by the window, looked at him and said “next time”. Before Christmas, I noticed that it was gone from the display. I said “oh well, not meant to be”. Christmas comes and what do I find sitting under the tree? The SCHNOZZ himself! They are being discontinued and my wife bought the last one in the store! Schnozz is a tissue holder. The box is strapped inside and the tissues come out of his nose. It is epic.