The 443rd film I have seen in theaters…

Buckle up me mateys! It’s time to set sail again!

(please be better than the last one…)

Henry, the son of Will Turner and Elizabeth Swan has spent his life searching for a way to free his father from the curse of the Flying Dutchman. Carina Smyth has spent her life studying the journal of Galileo, left to her by her father, to find a mythical treasure: The Trident of Poseidon. Captain Salazar is cursed, trapped as a Zombie/Ghost in the Devil’s Triangle after being beaten by young “Jack the Sparrow” decades earlier. Captain Hector Barbossa is the king of the pirates, with more treasure than he will ever need. Jack Sparrow is down on his luck, his crew ready to abandon him for lack of successful pirating. All will converge in the hunt for the Trident as they aim to take control of the very sea itself!

As before, this film is a tour de force for Johnny Depp’s Sparrow. He drunkenly leads us on another adventure, continuing to be the highlight of these films. The overall quality of the series may have gone down, but his Sparrow remains captivating. No small feat after 5 films. 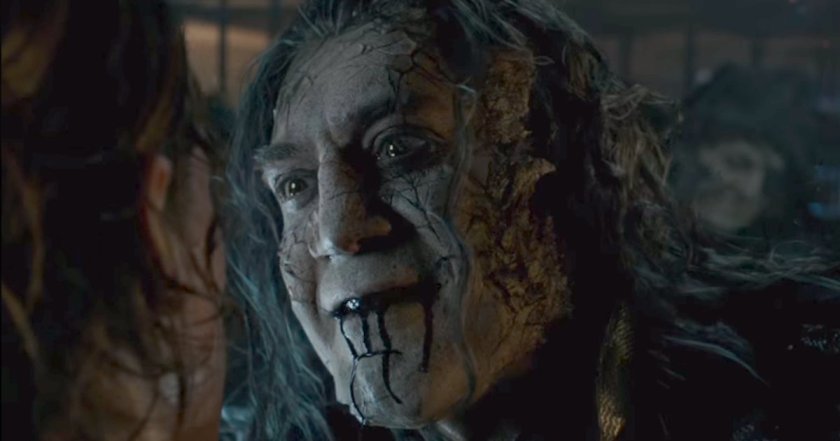 Javier Bardem is a great actor, with a thick accent. The fact that they made his voice even weirder with various gurgling water sounds did not help the situation. As a villain, he was more fleshed out than Blackbeard, but he is no Barbossa or Davy Jones. 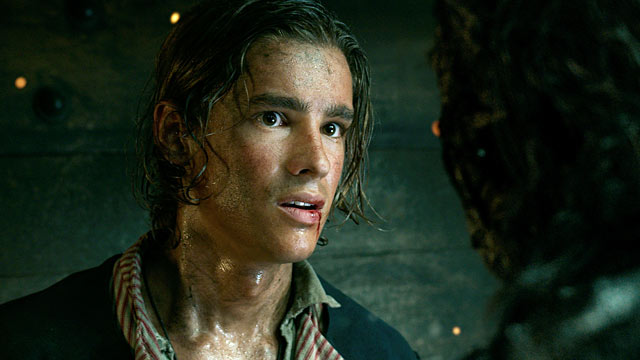 Brenton Thwaites joins the cast as Henry Turner. He never really did anything for me, which makes sense as he’s already done nothing for me as the lead actor in 2016’s abomination: Gods of Egypt. Go away Thwaites!

Kaya Scodelario is Carina, the “Elizabeth” character in this one. They go the strange route of having everyone think she is a witch because she is a scientist. She did a good job, but was ultimately there to be the new love interest and give Barbossa a story arc (spoiler: He is her long lost father)

Geoffrey Rush returns (presumably for the final time, but you never know with this series) as Barbossa. He is his normal conniving self until he realizes the young Carina is the daughter he abandoned decades earlier. This leads to a heroic turn for him and a good end to the character.

Returning again is the ever dependable Mr Gibbs, first mate of the Black pearl, played by Kevin McNally! It would not be a Pirates film without him standing by jack, whether he wants to or not!

Update: I regret to have neglected a major cameo in the first version of this article. Carrying on the tradition of Jack’s family being played by rock stars, Sir Paul McCartney makes an appearance as Jack Sparrow’s uncle! A brief appearance, mostly to tell a joke and give some advice, Sir Paul looked like he was having fun. Thanks to reader Robbie Bruens for pointing it out to me! A far superior writer than I, please check out his Blog at  https://fakemoviereviews.com! 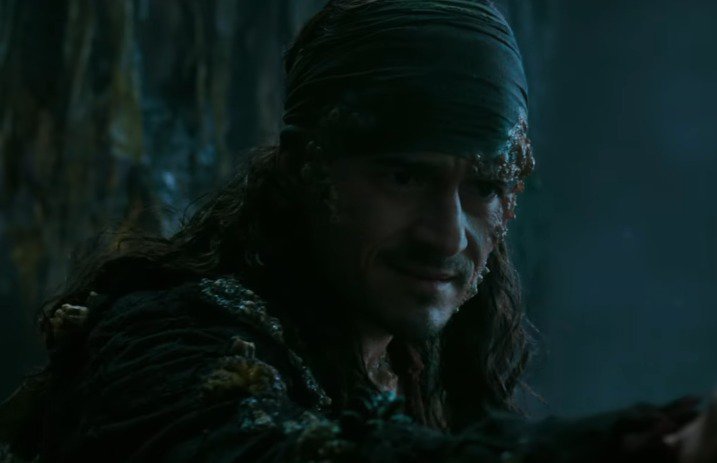 Appearing for 5 minutes (maybe) is Orlando Bloom! The finale featuring his reuniting with Elizabeth gave the film a good ending. They should end the Turner story here, but the end credits scene tells us that they will not. #Pirates6

An actress who’s name I can neither spell nor pronounce plays Barbossa’s Sea Witch. Call it a hunch, but she will probably return. #Pirates6

Speaking of returns, thank God they decided to bring back the Black Pearl. It was good to see it sail again!

Was this better than part 4 (the one with Ian McShane and the mermaids)? Yes. That is solely due to the story centering around the plot elements of the original trilogy. Speaking of story: It needed a rewrite. There was a whole subplot with the British Navy that did absolutely nothing in the film… literally nothing. It felt like a series of really amazing ideas sewn together to make a movie, which is a bit sad as they’ve had 6 years to prepare. Was it as good as the first two films? Hell no. Was it better than #3? Not quite, but it is close. Despite the flaws of “At World’s End”, and there were many, I think it has enough meat, and “the Gore Verbinksi effect” to give it the edge. Was I entertained by 5? Yes, I was. It was a fun couple of hours at the movies. 5/10