The 444th film I have seen in theaters…

Thousands of years ago, the Amazons, a race of warrior women were created to bring peace to mankind, but the machinations of the God of War, Ares, caused them to be placed in hiding on Themyscira, an island hidden from the eyes of man. They are ruled by Queen Hippolyta, who has a daughter –  Diana. She tries to protect her from the warrior ways, but to little avail. Young Diana is a natural. Eventually, Hippolyta relents and Diana is allowed to train, her power incredible, far beyond other Amazons.

One day, A plane crashes off the coast of Paradise Island. Steve Trevor is the pilot. Diana saves him, but he is followed by German soldiers and ships! A battle breaks out on the beach and many Amazons are killed. Diana believes that this “Great War” is the work of Ares, whom has long been feared to return. Diana gathers weapons and leaves the island with Trevor, to stop this war and kill Ares. The world of men, however, is not what she expected.

I was not sold on Gal Gadot when she was announced for Batman V Superman. Her performance in that film gave me hope. That hope bore fruit in this solo film. This IS Wonder Woman. Her Diana is strong, but is naïve about the world of men. The character has some great moments as she figures out what her mission on Earth should be. Lynda Carter was great, iconic, as Wonder Woman; but Gal Gadot is the definitive Diana Prince.

Chris Pine could act his way out of anything. This guy has yet to let me down. Charming, soulful, brave; his Steve Trevor is everything the character should be.

Robin Wright appears as Antiope, Diana’s Aunt and the General of the Amazons. A great actor can do wonders in just a few moments of screentime. Antiope is not on screen very long, but her performance made an impact. Well Done.

Danny Huston has made quite the living playing Generals and Gods. After playing Poseidon in Clash of the Titans, he appears here as General Ludendorff. For most of the film, Diana believe him to be Ares, God of War. The casting would make sense but, spoiler, he’s just an evil fuck.

David Thewlis, Professor Lupin himself plays Sir Patrick, a British lord who is fighting for peace. All the while though, he is ARES! God of War! Now, Thewlis is another excellent actor, but he is hardly physically imposing…until they strap the Ares armor on him!! Fantastic performance.

Connie Nielsen plays Hippolyta. At first I thought Wright should have had this part, but in the end it made more sense. Her role is small, much of it mysterious as she hides the truth from Diana- how she really came to be born!!!! (surprise: Zeus, being Zeus, knocked her up. He did that a lot.)

Elena Anaya plays Doctor Poison, the German chemical expert who is designing the ultimate poison gas to win the war. This was a small role that could have just been “creepy lady in mask”. Instead, Anaya gave us some fascinating moments as we peer into the psyche of this woman, both in her conversation with Trevor as well as her final scenes with Diana. 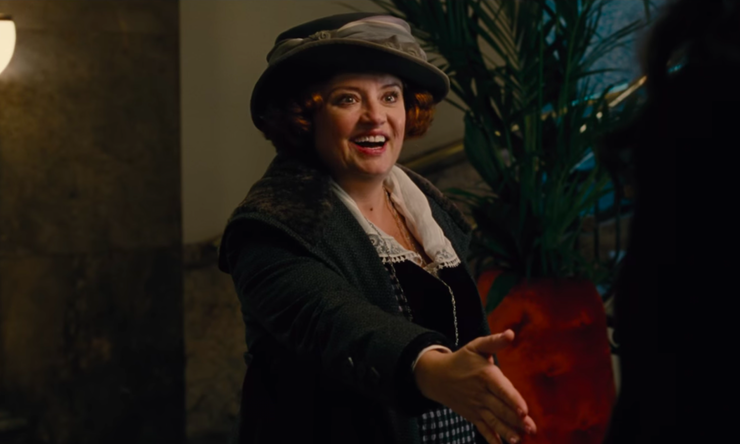 Lucy Davis is Etta Candy- Steve’s Secretary. She was being touted as the best part of the movie, pre-release, but it was just a comic relief role. Yes, she had a few moments to show some “girl power”, if that is the right word, but it was all seen in the trailers. She did well with what she was given, but did not stand out enough against the amazing cast of women in this film..

Now, you can’t have a suicide mission without a rag-tag bunch of soldiers! First up is Samir played by Said Taghmaoui. He is the funny member of the bunch, always trying to swindle and get a few gals. He has some fantastic scenes, particularly when under disguise.

Talk about a character that I loved, Ewen Bremner is Charlie, the hard drinking Scotsman sharpshooter who suffers from some serious PTSD. He has some very touching moments with Diana when he is feeling inadequate to the task ahead.

Eugene Brave Rock is the smuggler, “Chief”(possibly Apache Chief). Of the supporting cast, I would have liked to see his character fleshed out a bit more. One moment did stand out. After they have saved the village, the people celebrate and try to offer Chief some money in return for their actions. For a Smuggler who is only in the for the money, Chief really shows his true colors when he turns down their money. Great character work here.

Well, how did this stack up against the previous 3 DC films? It is the clear winner. The main cast is perfect, but the supporting players not only made the best with what they were given, but elevated it. Watching this, I was struck with the realization that they did not deviate from the character’s comic origin (save the change of setting from WW2 to WW1). The Greek mythology was allowed to exist, no science-ing it away like they did in Thor. They kept both of Diana’s best known origins, the newer daughter of Zeus angle, and the made from Clay version of john Byrne in the 80’s. What is more important is that the core of the character was intact. She is a warrior goddess, but she is also a beacon of hope and love. As much as I enjoyed the Henry Cavill’s take on Superman (and it is a good 1980’s-90’s interpretation) I wish he showed more of the moral grounding that Diana has. Whatever the future brings, I hope it includes sequels to this great movie. 8/10