Hello readers. I saw something absolutely ridiculous today and I felt the need to share it with you.

As I’ve been making my blog posts over the last several years, I’ve made a point of picking the best/worst films of each year and decade. The 2010’s are still in progress, but the 00’s are well put to bed. My pick for the worst 2000-09 film was Battlefield Earth. Absolutely the worst film I’ve ever seen in a theater, and I saw hundreds of movies that decade. Imagine my surprise today when I saw the latest facebook ad for Crackle, a movie app for phones, ipads, and roku type devices. 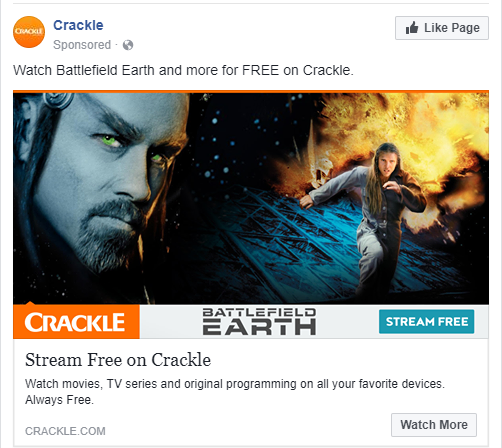 Seriously. They are using Battlefield Earth to advertise their product. “Look here folks! We have one of the worst pieces of shit to ever be released in cinemas… for FREE! That’s right! El Mierda Grande! Gratis! Is this the darkest timeline?

I’ve honestly been wondering if David Bowie was the linchpin holding reality together. Perhaps his death in early 2016 only created mild ripples in the space-time continuum that will eventually correct themselves. Or maybe they won’t… Jesus.