The 468th film I have seen in theaters…

This is not going to go the way you think

SPOILERS AHEAD! READ AT YOUR OWN RISK!

The resistance is fleeing their base on D’Qar as the First Order arrives to destroy them. Despite heavy losses, the Resistance escapes into hyperspace. When they re-enter normal space, the first order almost immediately jumps in behind them. They have found a way to track ships through hyperspace. A devastating attack kills Ackbar and the other leaders of the resistance. Only Princess Leia survives, thanks to her force powers. She is in a coma. Vice Admiral Holdo takes command as the First Order picks off Resistance ships.

As the fleet cannot escape while the hyperdrive tracker is active, Finn allies with new friend Rose Tico to find a hacker who can get them onto the First Order capital ship to disable it. This leads them to the casino planet of Canto Bight, where they meet DJ, a hacker with questionable morals. They escape Canto Bight and head back to the fleet.

Poe Dameron disagrees with Holdo’s plan, feeling that it will fail and lead to the end of the Resistance. He stages a mutiny and tries to take command, only to lose out as Leia regains consciousness and stuns him. She reveals Holdo’s REAL plan to Poe; sacrifice their capital cruiser and escape on cloaked transports to the nearby planet- Crait. There is an old Rebel base there. Poe feels like a fool and learns the value of trusting commanders.

On Acht-To, Rey pleads with Luke Skywalker to return to the resistance to fight the First Order. He refuses, believing that the universe does not need the Jedi Order. Rey suddenly begins having conversations with Kylo Ren via the force. Something is bringing them together. She sees the good in him as he sees the dark side in her. She rushes off to confront him, believing her force vision that if she goes to Kylo he WILL turn against Snoke. Luke is left behind trying to decide whether he has been right or wrong. An old friend helps him figure things out.

Rey goes to Kylo on Snoke’s Capital ship, and is captured. She is brought before Snoke and is tortured as he wants the location of Skywalker. Snoke reveals that it was he that used the force to connect Rey and Ben. he used Ben’s weakness to lure her to him. Rey’s vision of the future was true, from a certain point of view. Blinded by his hubris, Snoke is killed by Ben. He and Rey fight the Praetorian Guards together in Snoke’s throne room. While she interpreted these acts as him returning to the light, he in fact remains evil. He intends to become the new Supreme Leader of the First Order. He asks Rey to join him so that they can rule the galaxy together. She refuses, and manages to escape Snoke’s ship.

As all of this is happening, Rose, Finn, and DJ sneak onto the ship. Their plan to disable the tracker fails. They are captured and are about to be executed by Captain Phasma. DJ turns traitor and shows the First Order how to hack the Resistance cloak. Back in the fleet, the Resistance survivors board the cloaked transports and escape. Using DJ’s information, the First Order sees through their cloak begins to fire on the transports, decimating them. Holdo remains behind to steer the Cruiser. She turns it around and jumps to hyperspace DIRECTLY into the First Order fleet, killing herself but destroying the Star Destroyers. Finn and Rose fight their way out as this happens, killing Captain Phasma. They, and the surviving Resistance fighters, head to Crait, pursued by the surviving First Order, now led by Kylo Ren.

The First Order launches a ground assault on the Rebel Base, the rebels are losing. Their only hope is to escape, but they have no time. Luke Skywalker appears, steps out onto the battlefield and challenges Kylo to a fight. As Kylo and Luke battle, Rey gets the survivors out on the Falcon, their numbers now maybe 20 people. The resistance escapes and Kylo, all too late, discovers that Luke was never actually there. He used the force to project his image across the Galaxy to Crait. On Acht-to, Luke stumbles, having used all of his strength to fight Kylo and save the Resistance. The act was too much for him, he is dying.

The Resistance has survived. Rey is on the path to become a Jedi. Across the galaxy, the spark of hope returns. Young children are awakening to force sensitivity. Luke’s work is done, he is not the last Jedi. He sits on his rock and dies watching binary suns of Acht-to set. As Obi Wan and Yoda have before him, Luke’s body disappears as he joins the force. Cue waterworks.

Mark Hamill completes the life story of Luke Skywalker in epic fashion. His story went in a far different direction then I imagined, but it was done well.

Carrie Fisher was a national treasure. He death has left a giant hole in the Star Wars universe. She survives the film, but will likely die off screen in Episode IX. She had a lot of scenes in this film. While her “force pull” is divisive amongst the fans, I liked it. She at least got a little training from her brother.

Adam Driver is the lead actor of this film. This is increasingly Kylo “Ben Solo” Ren’s story. His performance was phenomenal. I believed every twist and turn his character took in the movie. Well done.

Daisy Ridley continues the journey of Rey. Her relationship with Skywalker was not what anyone was expecting, but it worked very well. I was a little surprised that her story did not advance all that much, but all of her motivation was on Ren. We did learn her parent’s identity though.

John Boyega is back as Finn. In this, we see Finn finally throw his lot in with the Resistance, and not just Rey. Finn completes his main story as he faces off with, and defeats, Captain Phasma. I am curious to see where he goes from here.

Oscar Isaac got a little more to do as Poe Dameron. They chose to have his arc be “hotshot pilot who disregards orders become a leader among the resistance.” This sets him up nicely to take the reins from Leia in IX. Isaac, as always, gives us a good performance.

Wow. Andy Serkis as Snoke. His scenes were quite good, but they way his character died was astounding. One of the better twists in the film, and perfectly executed. 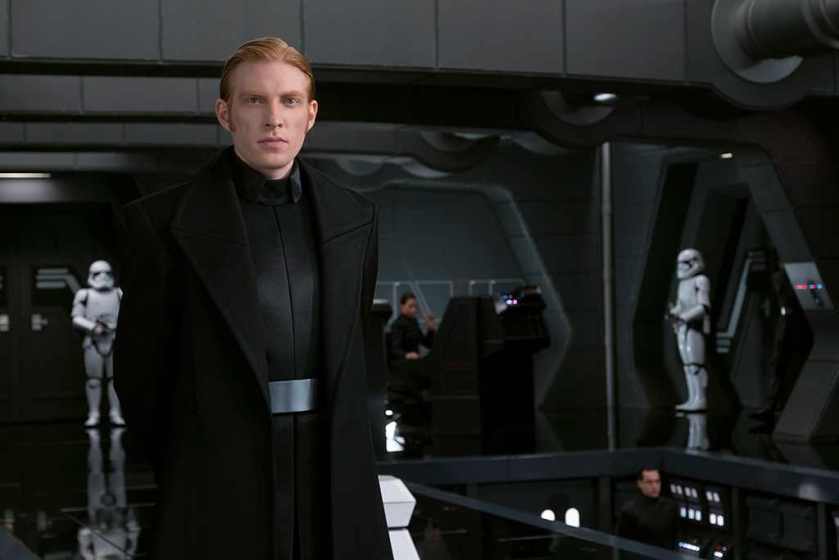 Hux became more of a comedic element in this than Force Awakens. His interactions with Ren were well done, but he has become an object of ridicule at this point. I am not sure how I feel about this. Domnhall Gleeson is a great actor, I wonder if he is being wasted. IX will be crucial to how Hux is remembered.

Gwendoline Christie is again under utilized as Phasma. She shows up to execute Finn, fights him, and falls to her (apparent) death in a ball of fire. She did more than her TFA role demanded, but I felt unfulfilled by her lack of importance. 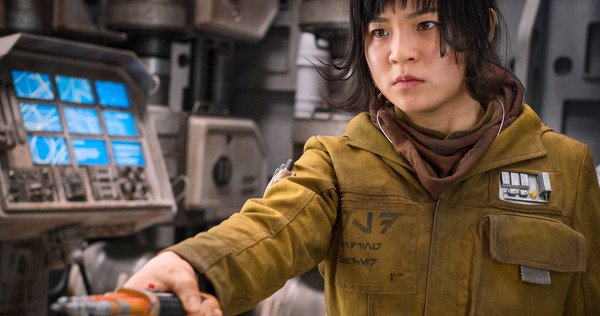 Kelly Marie Tran is Rose, the Resistance tech who falls in love with Finn. She does a fine job, but her character had some bad writing. The romance they set up between Rose and Finn was better than the Anakin/Padme writing of 15 years ago, but felt rushed. She embodies the spark, a hope for the future and the new Rebel Alliance. The scenes on Canto Bight were important to reinforce this. 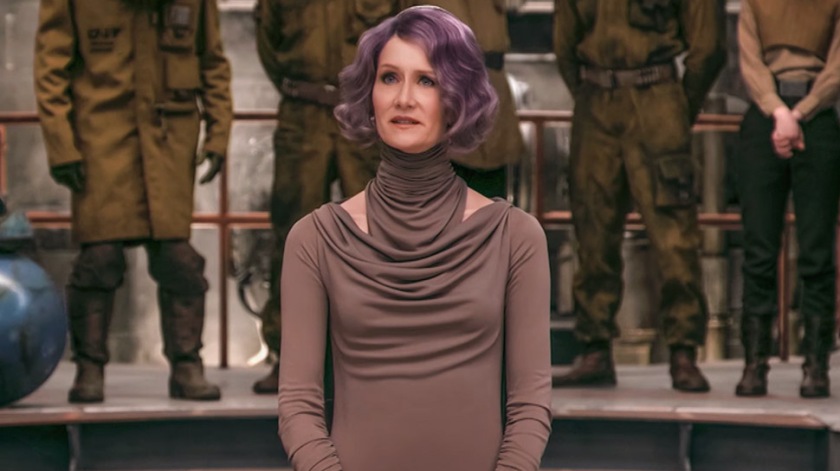 Some are saying that Holdo was unnecessary, that it should have been Leia or Ackbar to die, but I disagree. Laura Dern is always welcome. We all need “Diane” with her wacky hair every now and then.

Benecio del Toro as DJ, the scumbag hacker. His scenes were actually quite good, revealing the dark underbelly between the Civil War. I like that he straight up sold out Finn and Rose. A true scoundrel.

Frank Oz is back as Yoda’s ghost, and it was awesome.

This is totally different from the expected story of a Star Wars film. Rian Johnson has created what may be remembered as one of the more divisive films in the saga (too soon to really know). So, what did I think? I thought it was phenomenal.

I went in truly spoiler free and sat there, slack jawed, as this movie WENT FOR IT. No holding back, they decided to turn the story on its head and give us something different. The humor, to me, was welcome. The action scenes were fantastic, some of the best of ANY Star Wars film. Yes, the Leia space scene strangely staged, but once you think about it, its kind of cool that Leia had some Jedi training. It is unfortunate that we are not able to see her act as a mentor to Rey, in whatever capacity she was able, in Episode IX.

Some of you might love it. Some might hate it. I am with the former. This was an impressive movie with an intensity not seen in the previous films.