The 495th film I have seen in theaters…

Wait a minute…there are only 7 of them!

11 years after “Ocean’s Thirteen”, Debbie Ocean, sister of Danny, is released from prison. She recruits her old partner in crime and assembles a team to rob The Met Gala. Their target- a famous Cartier diamond necklace sitting on the neck of a famous actress. As before, there are schemes within schemes, and surprises.

Sandra Bullock carries the movie with ease. Her performance was excellent.

Cate Blanchett is not capable of turning in a bad performance, at least in nothing I’ve seen. She is awesome here.

Anne Hathaway is Daphne Kruger, the “air-head” celebrity, according to other reviews. Her performance was fantastic. She is one of the best things in the film.

Mindy Kaling is the Jewelry fabricator. She has some nice moments, but I wish her role had some more meat. A tough thing to ask for in a movie this packed with talent.

Sarah Paulson’s character cracks me up. She is running some sort of fencing business out of her garage by telling her husband its all “eBay” stuff. Fantastic.

Awkwafina plays the pickpocket. I am not at all familar with her, but this I can attest: She’s got a future. She stole every scene she was in, against some heavy hitters too. She is a rapper, writer, actress, trumpeter who lists Charles Bukowski as an influence. I am now a fan. 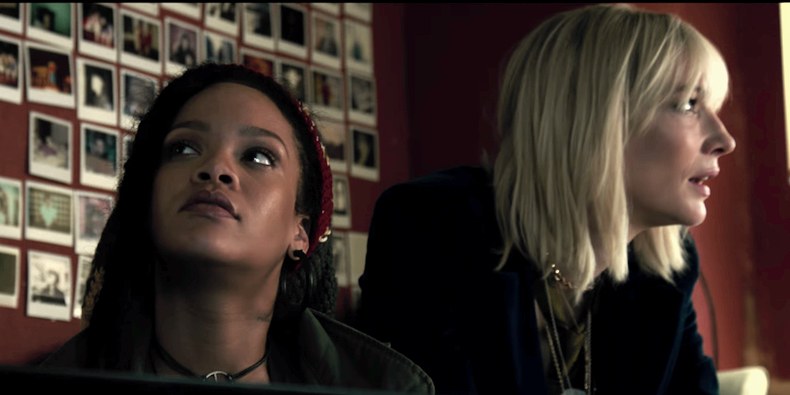 Rhianna plays the Hacker, Nine Ball. I still have a knee jerk reaction when pop stars make the transition to film, but Rhianna’s got the goods. Her filmography needs some work (Battleship, Annie, Valerian) but I think she can do some great work if given more opportunities like this.

Richard Armitage (The Hobbit) plays Claude, former lover and betrayer of Debbie Ocean, and date to Daphne Kruger at the Gala. He is set up, I think, as the villain of the piece, but it never really coalesces.

James Corden pops up in the last 10 minutes as the insurance investigator trying to find the stolen necklace.

The Cast: Excellent. The Performance: Stellar. I liked that they fit in a couple of cameos from the preceding films. (Elliot Gould is always welcome). The music selections were a perfect fit for the film. The cinematography and editing tried very hard to match the “cool” of the original trilogy but did not quite nail it. They got some beautiful shots, but I wish they went for a different aesthetic. The real problem here was the script.

75% of the film is your standard heist story. Nothing wrong there on paper, but where it starts to strain is the lack of threat. Yes, if they fail they go to prison, but they needed something else. 11 had Andy Garcia waiting in the wings to chop off Clooney’s balls. 12 had a fantastic performance by Vincent Cassel as “The Night Fox” and the continued threat of Garcia. 13 brought in Al Pacino. This film had… uh… I have no answer.

Now, it does manage to redeem itself in the final 15 minutes of the film as a few revelations come out about other activities occurring during the actual heist, and they throw James Corden into the mix as an insurance fraud investigator who has a history with the Ocean family (because of course he does lol). While these elements went a long way to give the film a great ending, it was not enough to elevate it to the level of original trilogy. I still really enjoyed it, and hope they make 2 more. They need to up the ante a bit though.