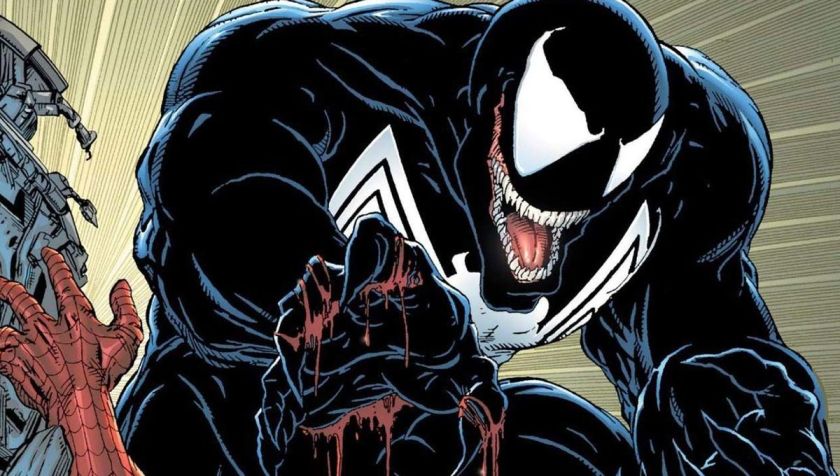 The 497th film I have seen in theaters…

Yup, this is a Venom movie.

Reporter Eddie Brock loses his job/fiance while trying to take down Billionaire Carlton Drake. Drake sent a ship to an asteroid and brought back alien life, “symbiotes”. One of them, Venom, latches on to Brock and they work together to take down Drake. Brains are eaten.

Tom Hardy is the only reason this film isn’t complete Dogshit. Always an interesting actor, Hardy takes Brock in an interesting direction. Where he really shines is when interacting with Venom. I did not expect there to be an “All of me” Steve Martin/Lily Tomlin vibe happening here, but it was there. Their comedy actually saves the movie.

Michelle Williams is Anne, Brock’s ex. Aside from the break up scene, her character was little more than what you see above. Stare worriedly. She did get to wear the suit all too briefly, and she did push a button at a crucial point in the climax so I guess that counts. Too good an actress for the role.

I like Riz Ahmed, and he did okay here as the Elon Musk/Jeff Bezos villain. He was a little too mustache twirling for my tastes though. He was a RIOT though. Har-har.

Alright. Did I enjoy the movie? Yes I did, and maybe that is enough for most to think it is good. However, the question must be asked; Is it a good movie? Objectively – No. The script is bad. This movie doesn’t know what it is. Horror? Sci-Fi? Super-hero? Buddy Comedy? Ideally all of those elements would be blended together to make a great movie, but that did not happen. As I said above, Tom Hardy saves the movie. The interaction between Brock and Venom was the one perfect thing in a film swimming in mediocrity.

All of that said, I am intrigued enough by Woody Harrelson’s tease as Cletus Cassidy/ Carnage that I want a sequel.