The 15th film I have seen in theaters…

In the year 2293, the U.S.S. Enterprise NCC-1701-B is ready for its maiden voyage. Retired officers Scott, Chekov, and Kirk are invited to be passengers on the trip. Along the way a distress signal is heard from nearby space. The Enterprise B answers the call and finds a ship being ravaged by some rip in the fabric of space. The distressed are saved but Captain Kirk is struck by the anomaly and declared lost.

Seventy-Eight years later, the Enterprise D under Captain Picard receives a distress signal from a Federation outpost; Klingons are attacking. As the Enterprise investigates the Klingon aggression, the mystery of the space anomaly, The Nexus, unfolds and Picard must enlist the help of a dead man to stop a maniac.

As an adult, I’ve become more of a Picard fan, but in 1994 I was 100% James T Kirk. Shatner was awesome to me. I grew up watching his adventures and I shed a tear in that cinema 26 years ago when my childhood hero died saving the day. Shatner played this excellently. The scenes of self doubt as he debates leaving the Nexus harken back to the best of his Captain’s dilemmas in the old series. RIP Captain Kirk.

Picard has some fantastic drama in this film. His brother and nephew, whom we met in the outstanding Season 4 episode “Family”, the coda to “Best of both worlds”, have perished in a fire. He is struggling with this grief and the knowledge that he will be the last Picard. Whatever faults the TNG films have, Picard is not one of them. Stewart is a god-level actor and his abilities are never wasted. 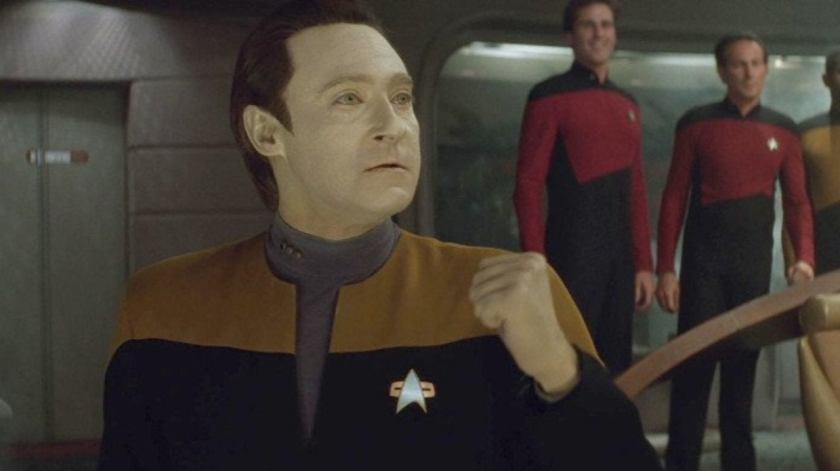 Brent Spiner is back as Data. This film has Data finally install a permanent Emotion chip. The B plot of the film is Data trying to adjust to this new programming. Its played for laughs in many scenes, but pays off when Data finds his cat, Spot, alive in the wreckage of the crash.

Malcolm McDowell is Dr Soran. I’ve read that he mostly took the job so that he can say “I’m the man who killed Kirk”. Her certainly did that. Fine work. The Duras Sisters are the secondary villains and are dispatched after a wonky space battle. They got short thrifted in this for sure.

The remaining regular cast don’t do all that much here. A highlight is Worf when he is promoted to Lt Commander on the holodeck. More on this below.

The final cast member, the Enterprise D got a good send off in one of the best scenes of any Trek film. That crash and excellent.

The first TNG film was okay but definitely did not feel like a TNG film. This was a “Picard meets Kirk” movie. On that level is succeeds immensely, but to the detriment of the other cast members. “First Contact” did a much better job of giving the command crew some  character moments. On a whole, this wasn’t a bad outing. The four TNG films were quite the mixed bag, but this is probably second to First Contact in terms of quality.