The 22nd Film I have seen in theaters…

Tom Cruise drops into this franchise as it moves to the big screen!

The IMF is sent on a mission to Prague which goes horribly wrong. The whole team, including Jim Phelps, are killed. Ethan Hunt is the only survivor. He soon discovers that the mission was a set up. A second IMF team was monitoring the operation to uncover a mole within the organization. As Ethan is the only one left alive, suspicion falls upon him. He then goes on an “impossible mission” to clear his name and discover who the real mole is. He enlists the aid of a few former IMF members in the cause.

Tom Cruise makes his debut as Ethan Hunt. Little did we know that he’d still be making these damn things 24 years later. This was clearly a “Tom Cruise” vehicle, as this avoided the “team working together” format for the “License to Kill” concept of the hero on the run. Cruise was, and is, great at this though. That wire stunt remains iconic, the first of many for him in this series.

Jon Voight steps into the role of Jim Phelps, leader of the IMF team. There was quite a bit of controversy regarding this character. Peter Graves famously played Phelps in all of the previous incarnations of the show. He was offered this part but refused to turn Phelps into a traitor. At the time I thought it was an interesting route for the story, but years later I think it was a mistake. Phelps should have died the hero. Graves unsuccessfully tried to sue to production for “Character Assassination”. 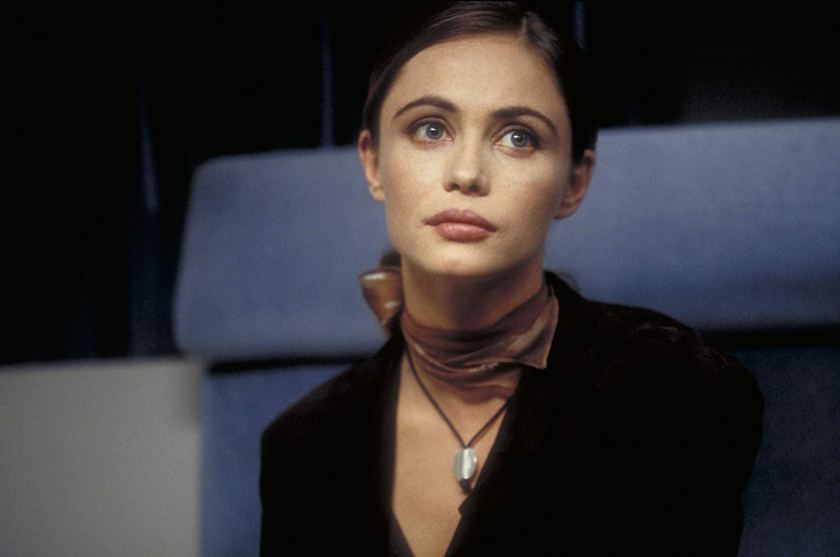 Emmanuelle Beart plays Claire, Jim’s wife. Claire is in on the scheme with her husband but is ultimately shot. I haven’t seen her in a while. It looks like she’s been appearing primarily in French productions. I recall having a crush on her back in the day. Mighty is one of the best words to describe Ving Rhames. The man just has a presence, used perfectly here as a former IMF member Luther Stickell. Luther is one of the guys that Ethan turns to for help. Rhames would continue to appear in all of the MI sequels, the only cast member aside from Cruise to do so.

Jean Reno plays Krieger, another IMF agent that helps Ethan but is soon revealed to be in league with Phelps. Reno was the go-to French actor in the 90’s and early 2000’s. He continues to work steadily appearing in no less than 5 productions last year.

Brian DePalma took the story in an interesting direction and set the series up for success with Cruise at the helm. As I said above, the revelation of Phelps as a traitor made no sense in the grand scheme of the series. I get that they wanted Phelps gone so that they could focus on Hunt, but it would be better to have Claire be behind it all. Let Phelps be suckered into it by his wife, thinking that he was trying to uncover the mole, or something.

One of the central ideas behind the series was that each week the team would go into a crazy situation, work together, and get out with no one being the wiser. All of that sort of went out the window in the film series. They did recapture it a bit as the future films, especially 3, built up Hunt’s support team to include a regular cast of characters. The object here, though, was to break the team, so I guess it succeeded on that front. Still worth a watch, its a good movie.